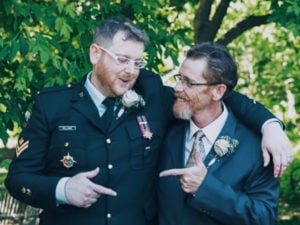 Fear is fun. The experience of fright in a safe environment – a Halloween haunted house or movie theater – elicits excitement followed by a critical release of primal emotion.  But what if catharsis never materializes? What if one were permanently locked in a state of adrenal fight or flight?  For PTSD sufferers, this constant state of alert is their life. Like a mousetrap, terror enters the brain but cannot find an exit. Life with PTSD is a waking nightmare that runs in a constant loop with no relief.

Trent Williams is on intimate terms with real life horror.  He retired from Canadian military in 2001 after serving in Bosnia during the especially brutal civil war. Long-simmering grievances in the former multi-cultural Yugoslavia exploded into genocidal extermination and so-called “ethnic cleansings” perpetrated by the rump Serbian military.

For Williams and veterans like him, the brain becomes an incubator for disturbing war experiences.  At first, victims may not even sense anything is wrong. But over time, their life is slowly, parasitically overtaken by PTSD.  “I was having flashbacks and nightmares. I’d see hands coming out of the ground to grab me,” says Williams. Eight years after arriving home from a war zone, his life fell apart. “I didn’t realize how screwed up I was. I couldn’t even live a normal life,” Williams remembers.  “I was barely functioning, I was so stuck.”

For many PTSD sufferers, the emotional landslide begins with deprivation of the most basic life function: sleep.  The restorative benefits of consistent sleep patterns are well documented. On the other hand, the neurological distress generated by a lack of sleep is equally profound.  Williams didn’t have a few sleepless nights; rather, he didn’t sleep well for almost a decade. He stopped dreaming. His memory and cognition became fuzzy. Focus was impossible. He became overwhelmed with depression and suicidal ideations. And Williams often drank himself to sleep.  “I felt like the walking dead,” he recalled.

“I DIDN’T WANT TO ADMIT SOMETHING WAS WRONG”

In truth, Williams himself was reluctant to admit his life was crumbling. “I didn’t want to admit something was wrong. I didn’t like the social stigma of it.”  When Williams finally reached out to Veterans Affairs Canada (VAC) for help, he was given the traditional treatment protocols: talk therapy and medication. At least they confirmed he was suffering from PTSD and major depressive disorder triggered by combat. But no therapy can work fast enough for someone suffering daily for over ten years. Medication cocktails masked – but did not fundamentally change – his core symptoms. Williams’ anxiety persisted and any increases in his medication turned him into a “zombie”.

By now, Williams was desperate. He researched frantically for any kind of relief. He came to understand that his illness stemmed – not from some personal weakness or failing – but from the physiology of his brain.  A neurological trip wire had been set off. There had to be some way of “resetting” it, he reasoned.

Conventional treatments had failed him, so Williams went exploring into the cutting edge of brain science. It was there he discovered neurofeedback, a time-tested brain training technology that was being used in exciting new ways. He saw testimonials from veterans on YouTube. Many had tried to technology and had remarkable success.  “I said to myself, ‘Why isn’t this more well known’?”

In 2015, he stumbled across an American veteran’s support website, HomecomingforVeterans.com. One of the volunteers there – Susan Gillies –  was a professional NeurOptimal neurofeedback trainer. She was offering neurofeedback technology to veterans…for free. She arranged a session for Williams using NeurOptimal Neurofeedback’s proprietary brain training system. Given Williams’ history, Gillies thought it wise to start him slowly. His first appointment was essentially a demo as opposed to a full “session” of neurofeedback training.

But the effects were anything but partial.

“That first [session] was like, ‘Wow’!” recalled Williams. There is no set threshold when a user starts to feel the positive effects of neurofeedback training.  But for Williams, the benefits were immediate and tangible. “It was like I came alive.” The funk weighing on his life suddenly lifted. All at once, he was able to pull himself out of the moat of negative thinking that he’d been drowning in for years. And that night, after a decade of REM sleep deprivation, Williams dreamed. He slept eight hours straight.

The benefits only bloomed as Williams continued a course of regular neurofeedback sessions with Gillies. After a few more sessions, he curbed his depression medications. The compulsion to drink himself to sleep evaporated. He stopped having night sweats. After feeling out of control for so long, Williams was back behind the wheel, choosing a direction and taking control of his life.  Williams noted, “The difference was unbelievable. Night and day.”  Soon after started the training, he earned his license for heavy machine and truck driving and secured a new job. His life was suddenly returned to him.

Trent’s son, Shawn, had followed in his father’s military service footsteps.  After completing two tours of duty in Afghanistan, Shawn was starting to exhibit classic signs of PTSD. Though some colleagues accused him of  “faking it”, Shawn was granted a medical discharge and returned home to his father’s care. One of the first things Williams did was introduce Shawn to Susan Gillies and her seemingly magical neurofeedback machine. Similarly, after just a few sessions Shawn claimed he “felt different. All that anxiety was just gone.”

Since regaining his life, Williams has become something of a neurofeedback evangelist. He spreads the gospel of brain science to any veteran who will listen. He continues to lobby VAC so that neurofeedback training will eventually become a service offered free of charge to even more veterans suffering from PTSD. Williams says that education and research is the key to these veterans understanding that their condition is not some personal weakness or failing. “Those guys suffering from no energy, no focus or concentration – they need to come forward”, offers Williams. As he has discovered, coming forward is the first step towards moving ahead and leaving PTSD behind.