Accidents Will Happen: Neurofeedback and TBI

Accidents Will Happen: Neurofeedback and TBI 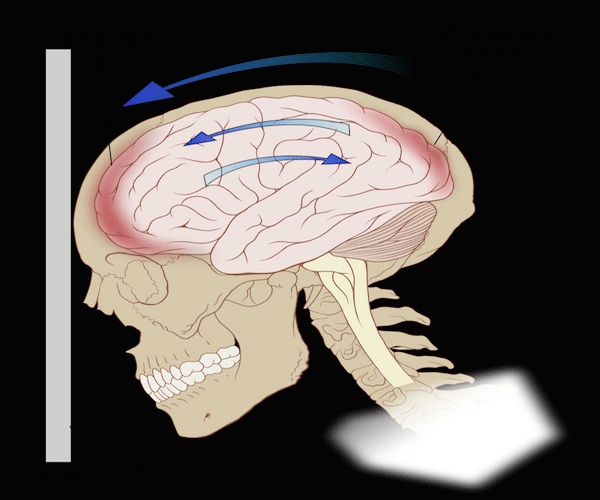 If you think about it, it’s clearly a serious design flaw. When is it a good idea to put something the consistency of flan in a hard shell, and then attach it to a fistful of bungie-cords.

And what happens when this precarious design hits a wall?

That’s the mess you’re in for when a person experiences a traumatic brain injury or TBI. The flan (brain) whips around on the end of the bungie-cord (neck) torqueing the brain around a leash (spinal cord), then banging up against a wall (the skull). Now imagine what happens to the thinking process in the aftermath of all that chaos.

After the initial trauma, the damage can get even worse. Fluids flood to the wound, an inflammatory response that – when not confined by a bony sphere –  is part of your body’s natural healing.  But when this happens inside the skull? That fluid can crush the injured brain, damaging it further.

In the best possible scenario, your seatbelt or helmet protects you from the upper-cut to the jaw that is TBI. If not, sometimes time and medicine can help you heal, can return a person to pre-injury competencies.

Sometimes, however, there’s residue from the injury. And that’s where strategies like neurofeedback come in, since they have been proven to boost the ability to focus, retain information, and think straight.

NEUROFEEDBACK TO THE RESCUE
According to the Centers for Disease Control, even mild traumatic brain injury can lead to difficulties with concentrating and sleeping, irritability, trouble retaining new information, and anxiety. For fifty years, researchers have been looking at whether brain-training strategies like neurofeedback help people handle the consequences of traumatic brain injury better.

In studies both in the US and abroad, neurofeedback has proven itself effective. In epilepsy cases—traumatic brain injury can manifest in epileptic-like brain activity—neurofeedback helped more than 80% of those affected with seizures in one study. Research on people with learning and attention deficits has indicated that brain-training improves the ability to focus and attend. And retain: several recent studies have indicated that using neurofeedback has led to marked improvements in memory function among both “normal” patients and those suffering from traumatic brain injuries. People using neurofeedback can learn to sleep better and control anxiety and other potential effects of TBI as well, like impaired impulse control and obsessiveness.

Of course, it’s best not to take a hit to the head; not to have accidents. It’s best to float like a butterfly and never bang up that boney compartment above your torso that resembles a daisy on a Corvette. But accidents happen.  And when they do, the impairment of that tender thing that makes you “you” can result in difficulty concentrating, learning and retaining information. It’s good to know there’s a noninvasive, non-medicating training like neurofeedback that can help put you firmly back on the path to recovery.