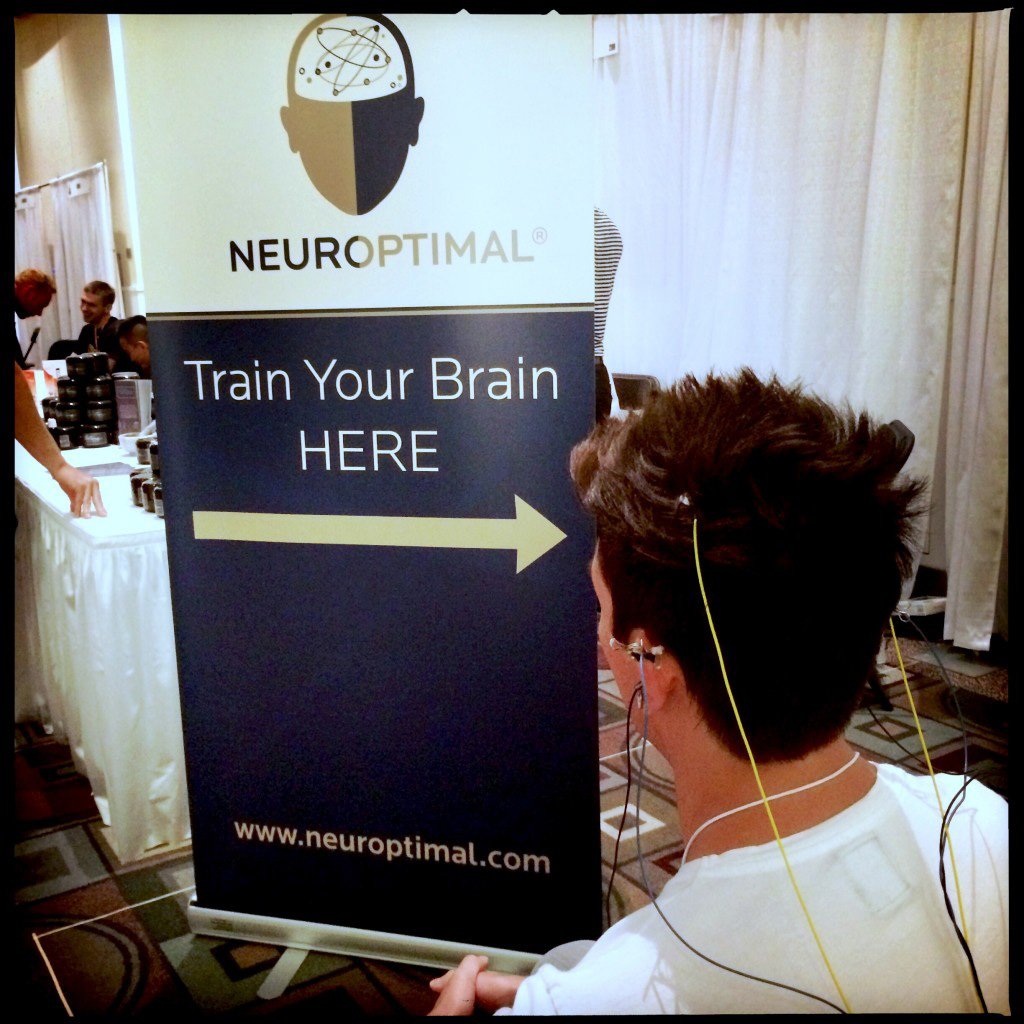 Southern California is currently in the throes of a serious drought. But on September 26th, there was an unexpected flood. The deluge came in the form of people: hyper-ambitious, self-improvement-types gathered from all over the world to sample the latest human performance technologies at The BulletProof Executive’s “Biohacking Conference” in Pasadena, California. But of all the vendors offering superfoods, health-boosting tips and digital gadgetry, the brain training system offered by NeurOptimal® Neurofeedback generated perhaps the biggest buzz of the conference.

Once word got out, the flood began.

The company booth was literally overrun with curious “biohackers” getting fitted with sensors in special “zero gravity” lounge chairs. Interest was so high that slots for 33 minute brain training sessions for the entire weekend filled up by noon on Friday.  To accommodate the overwhelming demand, NeurOptimal® added an additional neurofeedback station, for a total of five. NeurOptimal® trainers literally ran sessions continuously from 8:30AM to 6PM for three days straight –  over 150 neurofeedback sessions in all.

INSTANT FEEDBACK FOR NEUROFEEDBACK SYSTEM
NeurOptimal® Neurofeedback came a long way to make a big splash. But for the company’s Director of Operations, Samantha Diavatis, the 2,500 mile trip from company headquarters in Montreal to the sunny climes of Los Angeles was well worth the trip. “It was a great opportunity to introduce our unique neurofeedback system to so many new people” she commented between helping swarms of excited clients at the NeurOptimal® booth. “We were a little overwhelmed at first, but then we added the extra stations and just went to work.” Representatives for NeurOptimal® didn’t have to wear their sales hats very often over the weekend. The system was selling itself. “I’d be explaining our system to a new client”, remembers Diavatis, “and someone from the conference would lean in and say, ‘I use NeurOptimal® back home. It’s amazing. You have to try it'”. Diavatis laughs,  “They were doing my job for me!”.

SAFETY FIRST
Though based in cutting-edge technology, NeurOptimal® is a 100% non-invasive, naturopathic neurofeedback system.  Loaded onto a laptop computer, the NeurOptimal® software essentially functions like a mirror for the brain. The software “feeds back”  the brain’s own information, which in turn helps initiate the central nervous system’s own process of self-correction. Many clients report improved sleep, less anxiety and better focus following brain training sessions with NeurOptimal®.

ABOUT NEUROPTIMAL® NEUROFEEDBACK: A family-owned and run business, NeurOptimal® has sold neurofeedback systems all over the world. Users have clocked over 3 million brain training sessions using the NeurOptimal® software.