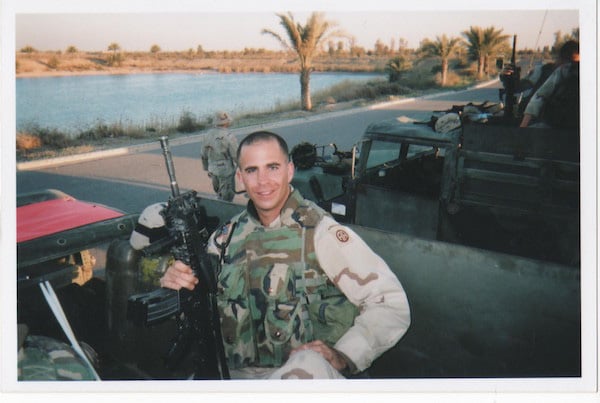 “For people with post-traumatic stress disorder, traumatic brain injury and other neurological disorders, a new treatment regimen is showing promise.”

By Taylor Sisk
Matt Ferraro experienced what he refers to as a “few incidents” while serving in Iraq and Afghanistan. A member of the 82nd Airborne Division, Ferraro did tours in Iraq in 2003 and 2004 and one in Afghanistan in 2004 – tense times often punctuated by high-velocity projectiles and shock waves against which no helmet or armor can protect.

One incident of note involved an improvised explosive device, another a rocket-propelled grenade. Headaches, dizziness, disorientation – Ferraro moved on; he was a soldier.

“Wow,” he said to himself, when his senses returned a couple days later. “I sure got a shot to the grape on that one.” Then there was the night of a training jump, a night he’s heard about from his buddies but still can’t recall. Apparently, he and another paratrooper collided before their chutes opened. Ferraro was unconscious for at least a half hour; he was then found wandering through the drop zone.

He didn’t give it much thought after that.

Then there was Fallujah – a head slap of a different sort. It would be quite awhile before he’d acknowledge that one.

Inevitably, he brought it all back stateside, and with it, this: forgetfulness, confusion, moodiness, anger.

“My brain was the one gift I was born with,” he said recently by phone from Point Reyes National Seashore in California, where he’s working temporarily as an interpretive ranger. The descendant of academics and poets and Oliver Wendell Holmes, he’d always wanted to be a writer.

In time, he was diagnosed with traumatic head injury and post-traumatic stress disorder, and that helped. Knowing what’s wrong helps.

But it was his introduction to Martha Delafield and neurofeedback therapy that started things turning around for real.

Neurofeedback, he said, “has exceeded my wildest expectations.”

The first domino
Delafield is a licensed clinical social worker with offices in Chapel Hill and Apex, and neurofeedback is among her preferred methods of therapy.

Neurofeedback is a form of biofeedback. EEG sensors are placed on the scalp to measure brain waves. Different neurofeedback systems employ different media: Some use video games; others, music of a new-age nature and psychedelic visuals. Sessions generally last about a half hour.

The client’s job is simply to relax while the sensors monitor the brain, suggesting where it’s strayed, been rendered unproductive, and guiding it back into synch. There’s no internal intervention; the brain does it all. That’s the objective, anyway. There are skeptics, those who say not enough research has been conducted. But a major step forward came last November, when the American Academy of Pediatrics approved neurofeedback as an evidence-based treatment option for children with ADHD.

“We’re geared for healing if we’re given the right information and we remove the obstacles,” Delafield said. “There’s a wisdom inherent in all of us.”

Neurofeedback, she said, holds a mirror up to the brain and allows it to make its own adjustments. It detects shifts in brain state – “turbulence,” she calls it – when it’s shifting from one state to another, “usually from present to not-present.”

With the system she uses, called NeurOptimal®, the client listens to music through headphones. Auditory cues that sound like skips on a vinyl record are sent when the sensors detect something askew.

“It’s just enough to let your brain know it’s going off,” Delafield said. “And your brain says, ‘Thank you for letting me know so early; I’ll correct myself now.’”

It’s a matter of detecting dissonance at the first domino, she said, before all the others come tumbling down.

“And the result is that everything runs more smoothly,” Delafield said, “which means your focus is better, sleep improves … reactive loops get unhooked.”

Like most neurofeedback practitioners, Delafield uses other forms of therapy as well, including talk therapy and energy work.

Laurie Hamilton, a psychiatrist in Asheville, said neurofeedback in combination with other therapies has shown success with about 85 percent of trauma victims, including a number of children, with whom she’s worked.

She’s also used it successfully with sufferers of fibromyalgia. Those clients have experienced reductions in pain, improved sleep and clearer cognition – and, she said, the effects have been sustained.

‘Tuning into nuance’
Delafield frequently uses neurofeedback with children diagnosed with ADHD. She uses it with adults suffering from anxiety or depression, people with substance abuse issues or those who want to wean themselves off prescribed medications. She uses it with others who want to improve their performance at work or in their hobbies.

She also participates in a program called Homecoming for Veterans, sponsored by the EEG Institute, a pioneer in neurofeedback research and training.

For some veterans, neurofeedback serves as remediation; for others, it’s more a matter of helping ease back into the flow.

Bryan Griffin feels like he left the military with no major residual issues. He was an infantryman and a sniper in the Marines, deployed to Iraq and Afghanistan. Today he’s a martial arts instructor in Chapel Hill.

Griffin said he felt a little jumpy his first couple of months back in the States, like when a car door slammed.

“But that’s pretty usual after something like that, where a loud bang meant danger,” he said. He’d spent a lot of time around IEDs.

Delafield said neurofeedback helps Griffin build from a calmer and more centered foundation. What’s been interesting, she said, has been watching him develop the capacity to “tune into nuances of internal shifts.”

He’s told Delafield that neurofeedback has helped him discover more inspired means of explaining martial arts to his students.

The effects of neurofeedback, Griffin said, depend on how the day is going. If his brain is in high gear, he generally comes out feeling calmer; if it’s a chill day, it tends to spur him.

Of vets in general, Delafield said, “It enables them to come back to a place of being more centered and less reactive without having to talk about anything at first, because I think that can be a stumbling block.

“Across the board, I think it’s important to talk about stuff, and they’ve all said that. But this enables them to get to a place where they can.”

Fallujah had been utter chaos. Ferraro and his buddies were deployed in small groups, totally surrounded while on patrol through the city or on mission. “It was just not good,” he said. “It was constant fear, danger from 360 degrees. It didn’t ever end.” This was just before the city fell; it was clear from the ground that the end was near. “We didn’t know what was going on, but there were way too many bad guys.”

It wasn’t a flashback that Ferraro experienced in that New Mexico Trader Joe’s – nor was it on the other occasions in which he entered a state of panic. It was just that the crowd, the milling, the uncertainty – it triggered a rush of adrenaline. It was overload, compounded by the not knowing.

“I just attributed it to, ‘Well, you’ve had some pretty messed-up years,” he said. “‘Now you just have to shift back to civilian mode. People aren’t trying to blow you up anymore.’”

The doctors were saying: Take this, take these – sedatives, antidepressants and sleeping pills. “It was like: ‘It won’t actually help you, but you’ll care less.’ And that’s not how I wanted to go through life.”

At last, came a brain scan, and what the neurologist said was not what you want to hear from a neurologist. His response upon seeing the charts was: “‘Whoa. Your brain is really [screwed] up,’” Ferraro recalled.

The neurologist showed Ferraro all the places in his brain where there was low or no connectivity. And, in rebuke to you-must-be-crazy, this insight was an iteration of good news. It helped explain why his brain was crashing, and, Ferraro said, he learned how to do the “control-alt-delete thing,” to back up and regroup.

“It was an epiphany,” he said. But he yet needed help, and neurofeedback, which his wife had researched, seemed well worth exploring.

He’s been doing sessions with Delafield for four years, and while he said it’s hard to gauge how it works at any one given time, he’s experienced a great deal of progress.

“I’ve noticed a whole bunch of improvement in things like retaining memories, in comprehension, in being able to problem-solve,” he said.

His job as a ranger requires that he talk to hundreds of people a day; he wouldn’t be able to do it, he said, if not for the neurofeedback. “What happens is that when my brain would overload, it would just turn off,” Ferraro said. “I believe that’s what was causing the panic attacks.”

Ferraro will be returning soon from the temporary job in California to his home outside of Fayetteville. He’s not certain what comes next. He wants to share what he’s learned, though it’s difficult yet to talk about what he’s experienced.

“There are no convenient points of reference,” he said, somewhat understatedly. Those with combat-related traumatic brain injuries and PTSD make for a unique band of brothers. Ferraro intends to suggest to others there’s hope.

“I found myself, truly, a stranger in a strange land,” he said. Neurofeedback has helped lead him home.

Link to original article can be found here.