Getting Back Out There

Getting Back Out There 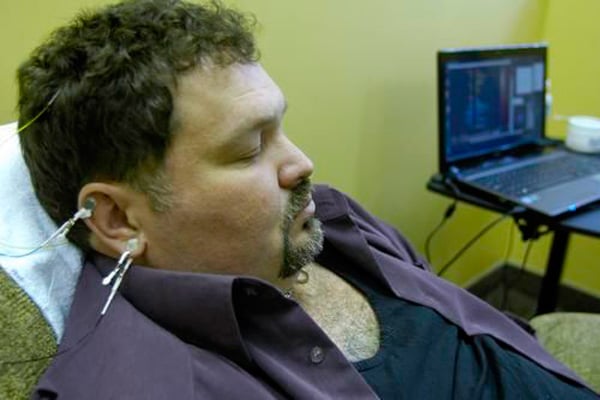 “While he may never be cured of PTSD, [one veteran] said neurofeedback has been the best treatment he has tried.”

A 20-year career in the Canadian Navy, with deployments to military and humanitarian missions around the world, left Francis wounded. Memories of seeing innocent civilians die violently from natural disasters and human conflict haunt his thoughts daily.

In Syria in 1999, Francis saw security forces beat a young boy to death in front of him and then mock his inability, as a member of a United Nations force, to do anything about it. Off the coast of Haiti in 1993, he took the lifeless body of a child from its mother’s arms. He was involved in the recovery of human remains in the water off Peggy’s Cove after the 1998 crash of a Swissair airliner.

Those incidents, and many others, took a toll.

Francis was diagnosed with post-traumatic stress disorder in 2003 after returning from a tour in Afghanistan. He left the Forces in 2008, but his condition remained – flashbacks, anxiety, nightmares and anger issues ruled his life. “I had a gun to my head a few times,” he said.

Francis found help in a new form of a 50-year-old treatment. Francis is one of a handful of veterans involved in a small pilot project supported by Veterans Affairs Canada to provide them with a neurofeedback system to use at home.

While he may never be cured of PTSD, Francis said neurofeedback has been the best treatment he has tried. “I’ve gone from someone who was sitting on a computer in the basement not talking to family to being able to run a small business by myself,” he said. “I can get out there. I can work. I’m not paralyzed.”

On Thursday, Francis and his wife, Tracy, picked up a laptop computer with the neurofeedback system installed on it. The timing was not a mistake. His wife and his doctor, Janet McCulloch, a psychiatrist at the Kingston Institute of Psychotherapy and Neurofeedback, both know he struggles on Remembrance Day.

He always does. “I consider PTSD as a little devil I’ve got with me all the time,” Francis said. “Your treatment puts him in a cage, but every so often he gets out. “(On Remembrance Day), I live with the dead. A lot of friends of mine have not made it back and I’m going to live with them (Friday). I’m going to have a bad day and my little demon is going to get out – and he’s going to bite me.”

Using neurofeedback, Francis said he is able to recover within a few hours. Before, it could take him days or weeks to pull himself out of the depression. The treatment sessions have improved Francis’ day-to-day life, Tracy says. “It does work,” she said.”The changes I’ve seen in him since we’ve been together in five years, the hot-temperedness – it’s still there but it’s less.”

A patient undergoing neurofeedback attaches electrodes to their ears and scalp. The patient also listens to music through headphones. A computer program reads the patient’s brainwaves and displays them on a graph on the screen. Brainwaves that appear in blue near the bottom of the display are related to thoughts related to anxiety, anger or depression – all thoughts associated with PTSD. Brainwaves that show up in red near the top of the graph are associated with planning, creativity and other high-functioning brain functions. When the patient’s brain shows energy associated with PTSD symptoms, static noise is added to the music being played on the headphones.

To clear the static, the patient almost automatically changes his or her thoughts, pushing out the bad brainwaves and replacing them with less-destructive thoughts. Patients, Francis included, often sleep through their treatment sessions, which last up to an hour.

Francis likens neurofeedback to the rumble strips along the edge of Hwy. 401. Motorists who hear the buzzing and feel the vibration as they hit the strips almost instinctively correct their driving. McCulloch says the technique has been compared to holding a mirror up to the brain. “When an individual has that information and sees what they are doing or not doing, they can adjust things accordingly.” With the system installed on a high-speed laptop computer, patients can treat themselves at home whenever they need it.

The system is not a new concept. Fifty years ago, researchers were using a similar system to help treat children for seizures. McCulloch has treated about 40 men using a combination of conventional talk therapy, medication and neurofeedback. Each neurofeedback system, including laptop and software, costs about $5,000. The cost of Francis’ system is being paid by Veterans Affairs Canada, and McCulloch said she hopes the system sees more extensive use among veterans.

Treatment differs between patients and depends on how long the person has had PTSD and how severe the problem is, McCulloch said. “If a person has had an illness for 50 years, they will take more sessions,” she said. Duane Kelsey was a dispatch rider in the signals corps during the Second World War. The soldiers in his unit provided the army’s communications and were among the enemy’s favorite targets. Only seven of his original unit returned home at war’s end.

After returning home, like so many soldiers he turned to alcohol to cope. “I knew there was something wrong besides the alcohol,” said Kelsey, 87, who has been sober for 38 years. “I went through hell when I came back. I was very lucky I didn’t get into any trouble. I was very fortunate I didn’t kill somebody or kill myself.”

He was finally diagnosed with PTSD two years ago.He started neurofeedback treatment earlier this year.  He said he was skeptical at first but is now a firm believer. “It seems to clear your mind and it makes you calmer,” he said. “I’m a lot calmer.”