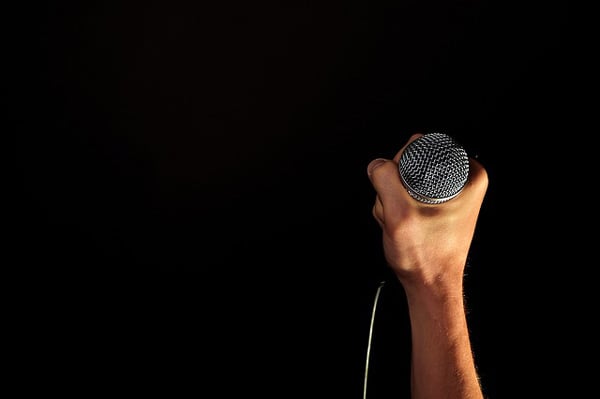 Some people like to sing in the shower. I like to sing in the my car. And in L.A., you spend three-quarters of your life in your 4 wheeled tree killer. So the way I see it, you might as well settle in and enjoy the toxic fumes and aroma of burnt rubber over some cool tunes.

I prefer to sing solo (but not acappella). I blanche at the thought of bursting into a chorus of TOM SAWYER with my wife or son riding shotgun. I’m a tad too self conscious for that. And let’s face it, I’m no pavement Pavarotti.

I do put a lot of effort in my whitewall warbling because I care about tonality, harmony and all those things that make music magical.  And we all know music is essential for brain health. Whether it’s Coltraine, The White Stripes or Ludwig Van, resonant notes, emitted electronically or acoustically, are like deep tissue massage for the brain. The neurotherapeutic jury is still out on Nicki Minaj, my son’s current favorite. I fear permanent brain damage or at least a propensity for potty mouth from repeated listenings of “Starships”.

I played in rock and jazz fusion bands all through college and I’ve long been afflicted with the “golden ear syndrome”. GES occurs when you absolutely must have the most authentic sound reproduction equipment available no matter what the cost. Better known in the vernacular as “audiophilia”, this affliction prompts one to employ the internet to chase down vacuum tubes made in one specific factory in Blackburn, England in 1961.  It entails expending precious time comparing the merits of copper versus silver speaker cable and buying exotic electronic gadgets to measure bass response in your living room.

I read recently that such obsessive compulsion actually had value among our prehistoric ancestors. Hyper-aware tribe members could sonically detect predatory animals or enemy tribes before the moment of attack.  I feel sure I’d be eaten by a jaguar in those days because I would probably stand there and marvel at the pleasing effect the surrounding rocks would have on the lower frequencies of the big cat’s roar. Bold, yet untaxing to the ear.

In my car, things are much safer. I don’t like to sing straight on key with the vocals; I enjoy digging for the complementary tones instead of just regurgitating stock melody. This is my idea of fun. But even a rolling carbon-emitter is not a hermetic environment. The outside world can occasionally break my bubble of sonic bliss. Stress; overwork; lack of REM sleep; the decline of Modern Cinema – I found that all these things can eventually undermine my staying in tune. On those hard days, I just feel “off” – off key, most especially. And this makes me batty. At one point, I thought I must surely be going tone deaf from years of smog inhalation. I was starting to wonder…

The big thing about NeurOptimal® is the little things. You know what I’m talking about. Significant psychological and even physiological changes just kind of creep up on you after just a few sessions. It’s as if you went to sleep, woke up and all of a sudden, someone moved the goalposts closer. So you kick the ball to the overture or a roaring crowd, and perfectly split the uprights as if you’ve been doing it all your life. Afterwards you just sit there and wonder, “How’d I do that?!”

And that’s what happened with my autobahn baying. One day I was just trying to harmonize with a complex piece of jazzy rock – a piece that always gives me trouble. But I wasn’t trying – I was just DOING it. And I’m talking smack dab on the money, tone for tone, Brian Wilson on a surfboard, harmony perfection. All at once I said out loud, “Where the hell did that come from?!”. But it was really no mystery. I’d been doing neurofeedback sessions consistently for many months. I’ve noticed other results improvements in life from NeurOptimal® that were not at all subtle.  But the car singing has something going for it that we writers crave: symbolic and thematic relevance.

We all know how neurofeedback works to straighten out those bent neurological angles and entanglements within your central nervous system that undermine your well being and happiness. As the Buddhists claim about chanting, neurofeedback puts you in harmony with the universe. In my case, neurofeedback literally gets me in tune with my environment – singing is just a great metaphor for that centering of self you feel after a few sessions.

Even if no one else can hear, I know the difference between “on key” and off kilter. Not only does it makes things much more fun in my MINI, but Neuroptimal® makes me feel like Tom Jones of the turnpike; Steve Perry of the passing lane; Elvis of the exit ramp…